A bridge has spanned the Speed River at this location as early as 1860 and was known first as “the Wellington Foundry Bridge” and later “the Inglis-Hunter Bridge” because of its close proximity to one of the very early industries in Guelph, established circa 1860, on the easterly bank of the river.

This bridge displays some unusual details, likely evidence of its earlier construction date. In particular, the bridge’s top chord and end post connection is unusual consisting of a large gusset plate as well as a pin. The top chord cover plate does not line up with the end post cover plate, and instead the top chord section extends beyond the end post slightly, ending abruptly. This sort of detail is more typical on the older truss bridges.

The end of the top chord is covered up by the builder plaque. The bridge shows some signs of alteration, with some particularly extensive alterations in the form of added beams and braces at the base of the end posts. However, the bridge retains built-up floor beams, which is noteworthy. The bridge sits on abutments that are concrete. The original abutment material would likely have not been concrete, suggesting the abutments were repaired or replaced at a later date with the concrete seen today. The concrete is old, however, not a recent addition.  – From HistoricBridges.org

The bridge became an important link in the movement of materials across the river. It served the needs of the many foundries and mills which occupied this area in the mid-1800’s. The choice of iron over the more traditional and less expensive wooden bridge reflects the growing industrialization of the community. 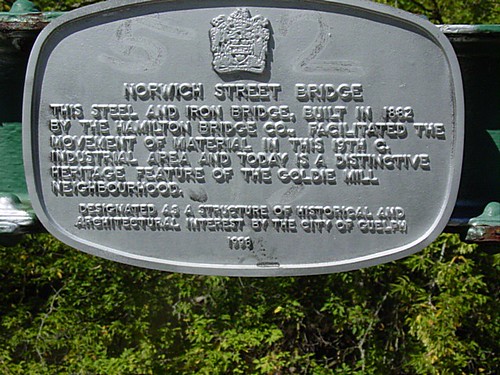 In 1998, the single span bridge was closed to traffic and turned into a pedestrian bridge linking the east and west sides of the Goldie Mill Neighbourhood. The bridge is also the only surviving example of several iron and steel bridges which once existed in Guelph, and is important as a distinctive heritage feature of the riverscape in this area. 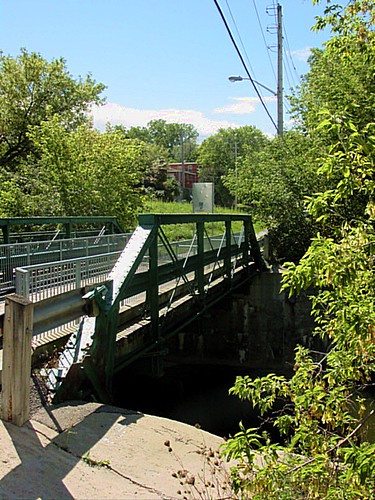 The City of Guelph is currently looking at options to improve the bridge due to its deteriorating state. These options include repair, removal, or permanent closure of the bridge. You can read about this proposal here.

City sets the stage to add footbridges to the core

One Reply to “Norwich Street Bridge: The last iron and steel bridge in Guelph”